In an old TV show called Heroes, the main villain obtains the powers of his victims by examining their brains to see how their powers worked.

While I like to think I’m not a bad guy, I’ve also approached things the same in cooking. I always want to know how things work, which methods are effective and the scientific reasons behind them. That’s why I find Chef Kenji Lopez-Alt a soul mate.

Kenji, winner of the James Beard Award for his cookbook The Food Lab, is also committed to explaining the scientific aspects of cooking. Anyway, he loves learning and discussing the hows and whys of cooking, so imagine my excitement when he agreed to appear as a guest on our Sini Gang podcast (available on Spotify). With my co-hosts, Chef Edward Bugia and food blogger Richie Zamora, we were able to sit down with him to discuss the science of food.

The secret to crispy fried chicken is to fry it twice, says Kenji.

Since the science of COVID-19 is relatively young, we all still struggle to fully grasp the effects of the virus and determine the details of its transmission.

Kenji and his team have published a relatively comprehensive article on this subject, and as a chef I was particularly concerned about transmission in food.

â€œEvery day we are constantly learning more, but so far there is no known case of getting it from eating food,â€ Kenji says. â€œYou should be relatively safe for take out. The problem is getting in touch with people. 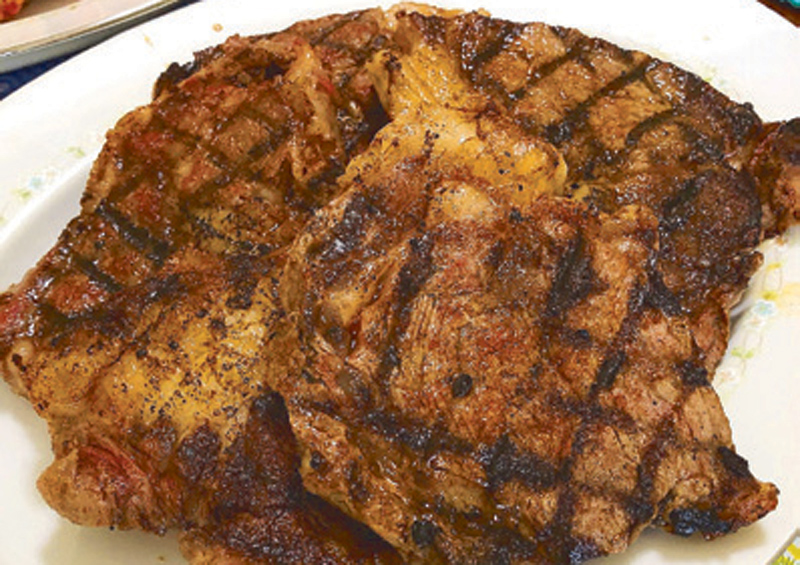 Cross hatching on steaks might not be the best way to cook them, Kenji says.

One of my favorite Food Lab videos is where they perform experiments to prove which steak cooking tips work and which are myths. The results will amaze even the most veteran of cooks.

Removing a steak from the ref 15 minutes before cooking to bring it back to room temperature and cook more evenly, for example, is a myth.

“It takes three or four hours for a steak to reach room temperature, which isn’t a safe thing to do anyway.”

The idea that you only flip a steak once during cooking? “It works well, but it turns out you can actually cook steak faster and more evenly if you turn it frequently.”

He suggests, instead, moving the steak more so that it browns evenly.

The secret of fried chicken

We also asked about Kenji’s secret to frying chicken. He recommends brining the chicken overnight in a salt water solution to keep it tasty and moist. Then it adopts the Korean model of double frying chicken.

â€œWe fry it once at 275 degrees F and cook the chicken all the way through at that temperature. We take it out and let it sit. Then we fry it again at 375 degrees F and it gets crispy.

He explains why chefs double fry: the first time you fry the outside may be dry, but some of the moisture inside the secondary coating layer migrates to the outer layer. , so when you fry it again, you remove more moisture to get that extra crispy crust.

We’ve all heard of foods that are supposed to romantically improve your mood like chocolates and oysters, so we decided to check out the science behind it.

â€œA lot of people think that there are a lot of objective truths about food, like this tastes better than that, but taste is not just something we feel with our mouth and nose; it’s something that we synthesize with our brains, â€says Kenji.

Indeed, we combine tastes with memories, atmosphere, mood, etc. If you associate oysters with romance in their mind, it will work on them.

Interestingly, this is part of the message of his new children’s book, Every Night is Pizza Night (available in the Philippines through Amazon in both physical and Kindle editions). Inspired by her daughter Alicia, the book is about a little girl who believes pizza is the best food in the world. During her travels, however, she discovers that the best food changes depending on the mood or context in which she finds herself.

“It’s a book about multiculturalism and expanding the mind.”

We talked about a lot more in our podcast, but I would probably fill 10 more pages if I told all the stories. I would like to end with my favorite quote among many Kenji gems, as he has assured people that understanding science doesn’t take away from the romance of cooking.

â€œI don’t think science and art are necessarily antithetical,â€ he says. â€œUnderstanding science and technique in fact, in many ways, enhances the artistic side and the emotional side of cooking. “

Drink plenty of water to avoid spicy foods, tips to stay healthy and fit in summer

March marks the start of summer and the change of seasons necessitates a change in routine, a new diet and, of course, a new training program adapted to the weather. Hot weather increases your body’s vulnerability to various ailments, which is why specific health precautions should be followed to ensure you stay fit and healthy […]

While most of us have probably been fed straight from the baby food jar with very little fuss or effort, modern infants have an overwhelming array of options for their first solid meal. There are innovative and beautiful packaging, including many low-waste options. There are pockets – oh, so many pockets. And there are even […]

The holy month of Ramadan or Ramzan began on April 2, 2022. Muslims follow the ritual of rigorous fasting or “Roza” throughout the month to show their devotion to Allah and sympathize with the less fortunate. Those who fast during Ramadan must refrain from eating or drinking for the whole day, consuming food only after […]